Top Ten Book Characters That Would Be

Sitting At My Lunch Table 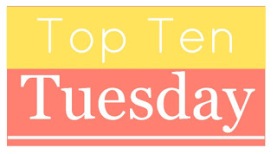 Top Ten Tuesday is an original feature/weekly meme created by The Broke and the Bookish. Every Tuesday, participating book bloggers blog about their top ten lists.

Okay so I probably follow way too many book blogs and decided that I should participate in some of these book memes because A. it’d help me post more without requiring me to spend all of my time reading (not that I’m complaining) and B. because it’s sound super fun.

Anyways, at school I’d always stick with my Asian friends during lunch. I swear I’m not prejudiced, it’s just that most of the other kids were a little bit high-strung. The drama they had was ridiculous, and since I was trying to stay out of it, I didn’t really hang out with them. Thus, the reason that most of my lunch buddies were Asian. Nowadays, at lunch, since the cliques of drama have split due to the transfer to high school, I sit with a more diverse group because most drama was been alleviated.

The kinda sad thing is that now that I look back on all of the characters that I adore in a book, most, if not all of them are angsty or kind of a jerk which makes picking hard because I don’t want mean characters to be at my lunch table! But I will think very hard to find a character that isn’t that bad. I might not be able to think of ten but I’ll try!

The first of the angsty characters that I adore. I read this series about when I was in 4th grade but I never really finished the series until I was probably in 6th grade. Either way, I was young enough, and forgetful enough, to actually think the first Percy Jackson movie was good. It’s a really embarrassing confession. I have always loved Nico. Even though he goes through that angry stage around books 3/4, by the time the Heroes of Olympus series rolled around, he became the coolest character. Yes, I’m heavily opinionated but that’s okay right? I’d want him at my lunch table because I’d really really want to get to know him, even if he wouldn’t want to know me, but let me dream okay?

(I refuse to insert that terrible picture that the publishing company produced to represent Nico.)

2. Evie from The Diviners

This book. I adored The Diviners when I read it. Evie was so sassy and I know that she would be so much fun at a lunch table. She knows how to have fun, how to dress, how to make life a little more interesting. She is the definition of fabulous. She might be in the wrong time period, but I suspect that she would treat it like an adventure. She could bring me a souvenir like a flapper dress or one of those fancy feathered headpieces.

I don’t think I need an explanation for this. Day is fab. Day is hot. Day is the best. Day is ambidextrous (which equals AWESOME). We could become besties if he sat at my lunch table. He could tell me the stories of his journeys in Legend. He could show off his cool athletic tricks.

4. Anna from Anna and the French Kiss

Anna is super fun and I think I’d have a blast if she was at my lunch table. She was so cheerful and even if she does kind of support the white girl stereotype at times, I don’t really care. She’s friendly and funny and I would LOVE IT if she dragged me off to watch some movies. Life would be more colorful if everybody at the table was different anyways.

5. Luna and Hermione from the Harry Potter books

I feel the need to add some more intelligence to the list so far. Hermione would be able to add tidbits of knowledge and debate about modern day issues. Lunch debates are always the best and I’d learn so much from her. Plus I could ask her to Accio my lost objects to me and help me study for quizzes.

Luna is just a unique character that is deserving of being at my lunch table. I’d enjoy having her quirkiness and kindness at my table.

6. Magnus from the Mortal Instruments Series

Magnus is fab and I’ve always wanted a cool gay/bisexual friend. He’s one half of the amazing ship Malec and his glitter, warlock-ness, and wardrobe alone justify having him at my lunch table. He’s the best conversationalist and we could totally talk about fashion.

7. Ben and Rafaela from Jellicoe Road

Ben was my favorite character in this book. He was quirky and funny and omigod I don’t even know why I loved him so much because he wasn’t even the main character. His dry, sarcastic humor was something I absolutely loved in the book. And Rafaela…. that girl was such a great friend to Taylor. She was funny and amazing and I absolutely loved her.

Actually, let me just say that I’d want the entire cast of that book to be at my lunch table.

8. Ally from Every Soul a Star

I loved this book. This book defined my childhood and was the peak of my 4th grade. Ally and Jack were probably the first couple I remember shipping and the book was just really really good. Even though she might be a little young, it’s been fourish years, so she must be grown up by now (okay these reasons are terrible but it’s alright right?). I love Wendy Mass’s writing so you guys should all go check out her writing!

That makes ten if you count all characters I have listed! What book characters would you want at your lunch table?