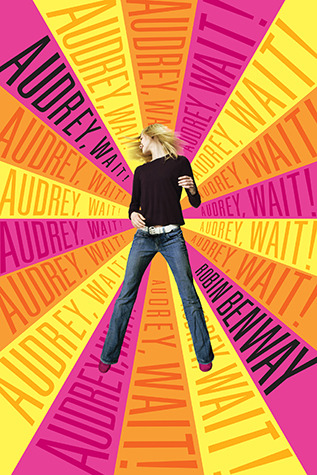 Now rabid fans are invading her school. People is running articles about her arm-warmers. The lead singer of the Lolitas wants her as his muse. (And the Internet is documenting her every move!) Audrey can’t hang out with her best friend or get with her new crush without being mobbed by fans and paparazzi.

Take a wild ride with Audrey as she makes headlines, has outrageous amounts of fun, confronts her ex on MTV, and gets the chance to show the world who she really is.

What initially pulled made me want to read this book was the really eye-catching cover and the title of the book. Then I read the summary and I knew this had to go on my tbr.

Audrey, Wait! is a story about a girl that had simply broken up with her boyfriend, Evan, and thus, inspired him to write a song. It blows up into the next biggest American pop hit, and of course, Audrey ends up being hounded by the paparazzi.

I strongly disliked the characters of this book. Audrey was bearable (if a little stupid) but I really didn’t like her best friend Victoria. The entire time I was reading I just felt the need to punch Victoria. Audrey is having trouble adjusting to the life of a celebrity and all Victoria can think about is the free stuff and perks of being well-known. Every time I saw her name, she was either asking about free make-up or if someone had invited her to some social event. The first time Audrey is called by a reporter, Victoria pressures her into answering the questions even though Audrey was definitely not of a mind-state to be smartly answering. Victoria becomes Audrey’s “agent” without her even asking. She uses Audrey’s name to get free things without even asking her! I felt like Victoria wasn’t a true friend; Instead she was portrayed as a leeching, fake friend.

The romance in this book was painful. At first I thought that it would be cute for Audrey to end up dating her co-worker. That was, until the romance became the #1 example of terrible romantic development.

James, the love interest, is absent for much of the beginning of the book (probably because he’s a really boring character). What attempts there were to develop the romance were quickly forgotten as his appearances were followed by four chapters of absence. There are probably three meaningful interactions between James and Audrey before they end up beginning to date (and no, that is not a spoiler because we all know it was going to happen). I found that the book used a lot of time skips to avoid having to describe events. The lack of build-up was partly salvaged with some teensy, teensy bit of chemistry between the two characters.

Audrey’s character was annoying but her narration was pretty fun to read. The reckless, teenage voice was represented very well. I thought that it was believable how she handled the fame and breakup.

I really really liked the way this book ended. It’s about as realistic as a unicorn flying into my house but nothing about this book screams verisimilitude. I liked how it was dramatic and showcased Audrey’s change in attitude towards her whole situation. Although I didn’t really like the trigger for her change, I enjoyed her I-don’t-give-a-crap attitude and I loved the way that she kind of realized that her situation would be okay. It would all be okay.

This book has a disappointing romance but a really fun plot. The characters were okay. This is one of those books you read when you really don’t want to use too much brain on a book.