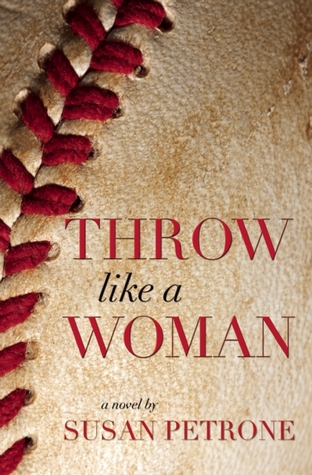 Forty years old, divorced, with two sons on the verge of adolescence and an ex-husband who considers visitation to be optional, Brenda Haversham isn’t having a whole lot of fun. She’s also no longer qualified for the work she loves, so she’s working in a cubicle instead while trying to make ends meet.

Brenda is short on money, short on connection with her kids, and short on any kind of social life. The only thing Brenda has in abundance is her anger. And that turns out to be her greatest asset.

When she was a kid, Brenda’s father taught her how to throw a good fastball. That wasn’t of much use to a girl, but it is enough to astound onlookers at a “test your speed” pitching cage before a Cleveland Indians game. The more Brenda pictures her ex-husband’s face on the other end, the harder she throws. And when someone tapes her performance and puts it up online, Brenda becomes an Internet sensation – and then more than that.

Soon, the Indians come calling and Brenda finds her life taking a turn in a new direction. She finds herself standing on the mound as the first woman player in Major League history – and dealing with everything that comes with it. The money is great and the endorsement deals are even better. The fury of “traditionalists,” not so much. And the conflicting emotions of her teammates are even harder to manage.

Meanwhile, Brenda’s home life is evolving faster than she can keep up, redefining her role as a mother, a friend, and even a lover.

As the season winds down Brenda will find out if she has what it takes to be a winner – at both baseball and life.

A funny, poignant, and endearing debut from a writer of rare warmth and humanity, FASTBALL is a 95-mile-an-hour heater of a novel.

I received this book from the author in exchange for a honest review.

I know almost nothing about baseball. I’m not a fan and I don’t think I ever will be one. My playing experiences are limited to attempts at school and summer camps. My pitching looking something like this….

So nowhere close to the protagonist’s powerful fastball. I kind of suck at baseball. But even with my lack of skill and understanding of the game, the book was still a really fun read.

Something that you have to know prior to reading is that you have to be able to suspend your disbelief. This book isn’t realistic in any way when it comes to women in baseball or romance. The book addresses sexism and family (which is realistic) but the way Brenda is able to raise through the ranks quickly isn’t believable. Somehow I don’t think that the baseball leagues would be so kind as to allow a woman to go from a minor league to a major league within half a year.

My only huge problem with the book was that I didn’t enjoy the writing style. It all felt like the author was telling, not showing. It didn’t flow well. I felt as though it wasn’t doing a sufficient job of communicating the story in a subtle way. It was clunky and distracting to me when I read.

I hated Brenda at the beginning of the book. She felt paranoid and overly angry. I liked that she was honest from the start. She never tried to tell anybody that she played for the enjoyment of the game. It was always about her kids and how she was going to support them. But I hated that all of her pitching success was dependent on anger rather than technique. I’m sure anger is a great place to start…. but I think it’s a really unreliable source to draw success from. I felt like she never tried to fix it. Her character development was practically nonexistent. I think she’s supposed to realize that she acted kind of immature and unfair to her husband and that she shouldn’t be totally dependent on her anger but her transformation felt like it happened overnight. One moment she’s pitching due to anger, the next she’s pitching out of joy. Kind of abrupt and weirdly done. The rest of her development was pretty good though. She learns that she should do what her kids want and how to stand up to her teammates. It was rewarding reading about how she slowly became an integrated member of the team. I began to like her as a character more and more until at the end, I was cheering her on. She’s relatable, strong, and a fantastic example of a great female heroine.

(Spoilers. Highlight to read.) The romance was weird. Unrealistic and insta-lovey to the max. I knew that Charlie and Brenda were going to end up dating from the very moment he began to actively support her. The twitter chats and the small moments where they communicated were cute but my face dropped when I realized that Charlie professed his love for her the third time they met. And sex on the second date? I understand how Brenda wanted it to be nothing more than that but the buildup felt really awkward. There wasn’t very much sexual chemistry going on at all. There was only the beginning stages of attraction so when it suddenly built up into sex….. well it felt rushed*. I’m still trying to figure out why it was added in because it felt really really unnecessary.

Weird romance aside, I really liked the family dynamics and other relationships of the book. I liked how Andy and Jon were completely different. I loved how Brenda cared so deeply for the two of them. I thought that every interaction felt like the family cared for each other. Andy’s growth as a teenager was kind of awkward but I suppose it was normal. We barely get to see him so it makes sense that we wouldn’t really be able to see all of his development. Nonetheless, I enjoyed learning about how Brenda’s baseball career simultaneously brought the family together and pushed them further apart.

The book touched a lot on feminism. Obviously it would seeing as baseball is a sport traditionally played by men. To me, it didn’t feel as though it was making a strong stand for more females in male-oriented sports. On the contrary, it felt more like a stand for women having power over their lives. I had so much respect for Brenda and her ability to balance so much on her plate. She was strong, able to support herself, and represented that women can do whatever the hell they want. Go women!

OH AND ONE MORE THING. I adored the prank wars between Brenda and Pasquela and Cipriani. It was funny and entertaining. There was one prank where Pasquela and Cipriani hung a bunch of tampons from the ceiling of her locker room. Rather than being offended, Brenda thought about how it was such a waste of tampons. I totally related to Brenda in that moment.

I didn’t really like it at first, but the book really grew on me! Worth a read if you are a baseball fan or if you like reading books with strong female protagonists.