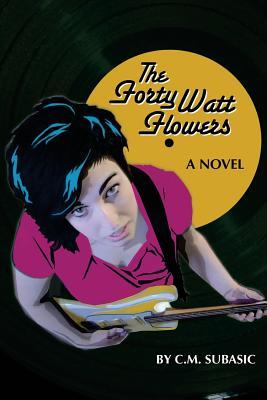 A comic novel as colorful and gritty as Georgia red clay, The Forty Watt Flowers gives you a moshpit view of the indie band world of Athens, GA. It is a story written in guitar riffs, sweat and hope.

All Trisha wants to do is create something meaningful. Since she’s living in the indie band capital of North America, she brings four other women together and The Forty Watt Flowers are formed. Unfortunately, making great music isn’t as easy as it sounds.

Rosemarie, on keyboards, has a libido as fierce as a hurricane. Aline, the singer, is a hermit, scratching out poems in her antebellum mansion. Juanita, on drums, has a poison tongue too quick on the draw. Toni, on guitar, made the mistake of heading South to come out of the closet.

More challenging than managing this crew of misfits, Trisha needs to undo the destruction of a family. If she reaches out to her parents after two years of radio silence, will they still blame her for the death of her sister?

From the jock atmosphere of the garage where they rehearse to the beer-soaked bars where they gig, these five young women struggle to find beauty in the mess of notes they try to play and the chaos of their lives.

In a world of quick quips, status updates and 140-character philosophy, this book offers a reminder that anything worth doing requires reflection. That artistry, the truths we all recognize, can only be found when we listen deeply to ourselves and those around us.

A playful and sparkling novel full of characters you’ll love to hate and hate to love, The Forty Watt Flowers explores the liberating powers of rock’n’roll in a notorious music town full of the charm of the New South.

I received a copy from the author in exchange for an honest review.

To the author: I realize that this review is coming out way later than when I actually received the book. So to make up for that long wait period, I’m writing a really long review. Enjoy~

This book was fun.

Now I actually enjoyed this book a lot. I was a little worried that I wouldn’t like it because of the fact that the first chapter read a lot like an adult novel to me (not that I have anything against those). I just tend to stay away from it because I feel like I have trouble relating with the characters. As a teenager, I just can’t begin to fathom some of the daily issues they go through.

The book itself was about rock music and bands, which is one of my favorite genres of music. I love the raw and unadulterated sound of a band just making music. So obviously, when I was offered a copy from the author, I was pretty excited about reading it.

If I could summarize this book in a sentence, it’d probably be this.

“Bartending playwright goes through a mid-life crisis and starts a female rock band.”

The focus of this book was friendship and self-discovery. Rock bands require a lot of teamwork to provide the right sound and make meaningful music that has a life of it’s own. So while this book lacked a plot, there was definitely a lot of development of the relationships within the book. Friendships are yay! I liked most of the relationships in the book. They were well written and realistic.

The band was made up of five women: Trisha, Rosemarie, Aline, Juanita, and Toni. Each of them were important to the band and had their own important backstories.

Trisha, being the main character, obviously had the most character development. The problem is that I found her kind of bland. She didn’t stand out as a protagonist to me at all. I had a little trouble connecting with her character. However, as a whole, her character wasn’t bad at all. She was likable, reasonable, and had a lot of development within the novel. But while her character was relatively well-done, her backstory wasn’t done to my liking. She has a lot of baggage when it comes to family relationships and her sister’s death but it felt…. really glossed over. The emotions felt off and anticlimatic. We learn a lot about how her parents blamed her sister’s death on her and as a result, I was expecting a huge, emotional confrontation. This family schism had extended numerous years for god’s sake! But alas, it was fixed with a few emails and phone calls.

On top of this, Trisha’s relationship with her boyfriend, Brent was crumbling. I could tell from the very first time I met Brent that the relationship was going to fall apart. This was handled relatively well. Trisha was smart and left the relationship as soon as warning signs went up. It’s probably the first time I’d ever read a book where the girl doesn’t try to stay with a bad relationship. So kudos to Trisha! More points to her for being a smart, strong woman.

Rosemarie, on the other hand, annoyed me to no end. Even though I’m way younger than her (by a lot), there were innumerable times that I wanted to just tell her to act her age or to be more mature in certain situations. Juanita was my soul sister during this part. I was just as annoyed as she was with Rosemarie. The constant lack of responsibility and regard for her bandmates really really grated on me. And the fact that she never thinks that she does anything wrong just made me want to scream. If that doesn’t scream personality glitch, I don’t know what does. The way that she cheated on her boyfriend sucked. But what really made me annoyed was that she cheated on him with Trisha’s ex-boyfriend. The worst thing was that Toni had a crush on her, and as soon as Rosemarie learned, she just outright rejected it. Like really girl? You were friends with her for such a long time. In this way, I thought that Trisha acted too lenient towards Rosemarie. She seriously gave me headache but since it was a part of her character, I’m not going to take off points from the book’s score. Even if she was a pain, she contributed to the band’s story and still felt genuine.

The other characters, Toni, Juanita, and Aline were okay. Toni and Juanita came in a package deal but both of them had their own quirks and differences. I liked Juanita quite a bit. Her personality reminded me of other hardy, tomboyish characters. Toni was also a pretty good character.

Overall, the characters were well done, but I think they could have been pushed more. They had a lot of potential but I don’t think they completely reached it.

Something I liked a lot were the little inserts between the chapters. There was always a little history about Athens, GA or a little blurb of the lyrics. I thought it was great because it was always connected to the chapter in some way. It was fun and effective way to help readers visualize the magnitude of the location and clubs.

The Forty-Watt Flowers has a lot of heart and is simultaneously inspiring and educational. Even if the writing isn’t my favorite thing about the book, the development of the band and the struggles they faced felt genuine. I felt like I could understand their problems with finding their sound and teamwork. It was a realistic look at bands and their creations. Everything from stage fright to member cooperation is included well and gives readers a great view at the dynamics of band interactions.