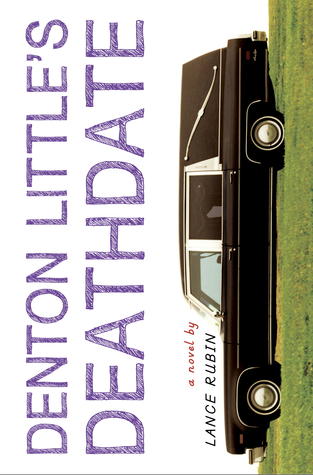 Fans of John Green and Matthew Quick: Get ready to die laughing.

Denton Little’s Deathdate takes place in a world exactly like our own except that everyone knows the day they will die. For 17-year-old Denton Little, that’s tomorrow, the day of his senior prom.

Despite his early deathdate, Denton has always wanted to live a normal life, but his final days are filled with dramatic firsts. First hangover. First sex. First love triangle (as the first sex seems to have happened not with his adoring girlfriend, but with his best friend’s hostile sister. Though he’s not totally sure. See: first hangover.) His anxiety builds when he discovers a strange purple rash making its way up his body. Is this what will kill him? And then a strange man shows up at his funeral, claiming to have known Denton’s long-deceased mother, and warning him to beware of suspicious government characters…. Suddenly Denton’s life is filled with mysterious questions and precious little time to find the answers.

Debut author Lance Rubin takes us on a fast, furious, and outrageously funny ride through the last hours of a teenager’s life as he searches for love, meaning, answers, and (just maybe) a way to live on.

This book was really entertaining. The only difference between the world in this book and ours is that people know what day they’ll die. Otherwise, it’s like any other contemporary book except that there are some pretty twisted social norms in their society.

I wasn’t sold in the beginning. I thought Denton was kind of dumb and the way the book opened made me really question what I was reading. But as it went on, the book grew to be better and better. Denton is a funny character and his narration was so much fun to read. He’s hilarious. It reminded me a little bit of Winger but it more focused due to the plot of the book. But wow, this book reminds me of satire writing. Everything is overexaggerated and the plot is borderline ridiculous.

The characters are like your typical YA characters but the drama involved with them is hilarious. They’re believable, kind of quirky, but at the same time, so realistically endearing. There is an entire cast of unique characters including, but not limited to, the crazy but supportive best friend, the girlfriend, the high-as-fuck pothead, the over-protective stepmom, the grumpy but entertaining grandpa, and the socially inept creepy female. Sounds like a disaster waiting to happen, but in this book, they were handled very very well.

Needless to say, by the time I was done reading, this book had taken a hold of me. It’s funny and a whole bunch of fun to read and I definitely recommend it to anybody who needs a good laugh.

The plot, as stated, is so ridiculous. It starts out normal enough. Denton wakes up in his best friend’s sister’s bed, disoriented, hungover, and less than a day away from his death. He thinks that his girlfriend dumped him (turns out she didn’t) and the drama begins to unfurl. Soon, he begins to develop a funny purple and red rash on himself that may or may not be the reason he dies. There’s funny business going on with his parents and he’s pretty sure his girlfriend’s ex keeps trying to kill him. He nearly get hits by a pothead’s yellow car like three times. There’s a lot going on with this book that’s just plain weird, but it’s great fun. The progression of the book is kind of rushed at the end, especially the bit with his mom and past history, but whatever. I liked it a lot. I think there is a sequel but this is one instance where I don’t really want one. I really enjoyed this book and I’m afraid that the sequel won’t be as good. It doesn’t really matter to me that the end left it open because it felt complete. Kind of weird considering how the book ends but I felt a sense of closure.

This is probably one of my shorter reviews but I honestly don’t even know what I should say about this book. All I can say that it’s reminiscent of a really good crack fanfic. Funny and worth a read.