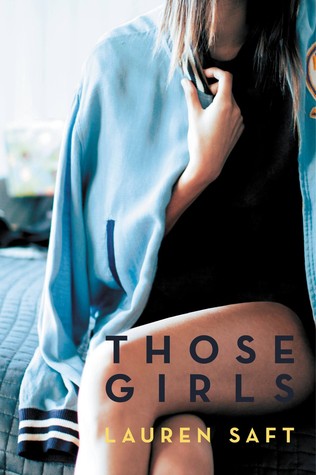 Some girls will always have your back, and some girls can’t help but stab you in it.

Junior year, the suburbs of Philadelphia. Alex, Mollie and Veronica are those girls: they’re the best of friends and the party girls of the school. But how well does everybody know them–and really, how well do they know one another? Alex is secretly in love with the boy next door and has joined a band–without telling anyone. Mollie suffers from a popular (and possibly sociopathic) boyfriend, as well as a serious mean streak. And Veronica just wants to be loved–literally, figuratively, physically….she’s not particular. Will this be the year that bonds them forever….or tears them apart for good?

Lauren Saft masterfully conveys what goes on in the mind of a teenage girl, and her debut novel is raw, honest, hilarious, and thought-provoking, with a healthy dose of heart.

I received an ARC of this from the publisher via the NOVL Newsletter. This does not affect my opinions and review in any way.

I think this was trying to be the literary Mean Girls. It didn’t really get there, though.

For one, none of the characters were remotely likable. The closest out of the three main characters that I can even say that I might have liked was Alexandra but even that is a stretch.

“Lauren Saft masterfully conveys what goes on in the mind of a teenage girl, and her debut novel is raw, honest, hilarious, and thought-provoking, with a healthy dose of heart.”

Don’t listen to the blurb. Just don’t. I know a lot of teenage girls (myself being one) and I don’t think any of them can compare to how they are portrayed in this book.

There are three different POVs in this book. Telling them apart wasn’t all that difficult for me but that wasn’t the issue here. The issue was the fact that all three of them were batshit crazy. They had one of the most toxic friendships I have ever read about. If this is supposed to be an “accurate” representation of the modern female friendship, then I just pray for the sanity and safety of students everywhere. Friends don’t slut shame each other. Even jokingly. Friends don’t gang up on each other and isolate others. They don’t steal each other’s boyfriends and lie about the truth. But all of this, and more, is exactly how Alex, Mollie, and Veronica treat each other.

Terrible characters aside, the entire plot of the book was incredibly pointless. It read like a bad soap drama and I just wanted more than that. There has to be some substance to the plot. I don’t want to read about some dumb party or how this girl likes that boy if there isn’t any point to it. The plot was just a continuous recall of drama. There was no complexity or meaning to any of it. In the end, all it did was show me that these three girls were absolutely insane. I don’t recommend it to anybody.