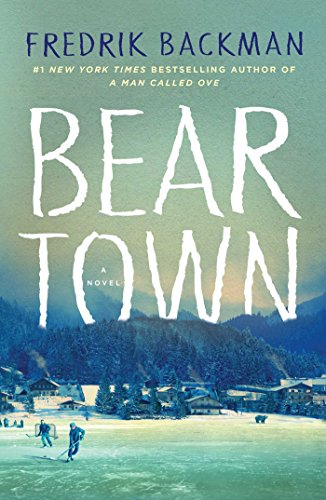 The #1 New York Times bestselling author of A Man Called Overeturns with a dazzling, profound novel about a small town with a big dream—and the price required to make it come true.

People say Beartown is finished. A tiny community nestled deep in the forest, it is slowly losing ground to the ever encroaching trees. But down by the lake stands an old ice rink, built generations ago by the working men who founded this town. And in that ice rink is the reason people in Beartown believe tomorrow will be better than today. Their junior ice hockey team is about to compete in the national semi-finals, and they actually have a shot at winning. All the hopes and dreams of this place now rest on the shoulders of a handful of teenage boys.

Being responsible for the hopes of an entire town is a heavy burden, and the semi-final match is the catalyst for a violent act that will leave a young girl traumatized and a town in turmoil. Accusations are made and, like ripples on a pond, they travel through all of Beartown, leaving no resident unaffected.

Beartown explores the hopes that bring a small community together, the secrets that tear it apart, and the courage it takes for an individual to go against the grain. In this story of a small forest town, Fredrik Backman has found the entire world.

I have so many thoughts on this book not the least of which is that I really really enjoyed this. It was the easiest read I’ve had in a while; once I was hooked, the 400 or so pages felt like a breeze. Or maybe it was just that I got so emotionally invested in the characters and small-town politics of this novel that I simply couldn’t stop reading.

I picked this book up because I was feeling very nostalgic about my figure skating days. Like seriously I was having dreams about doing double jumps and spins across the ice. I was in need of a hockey book.

The half-star that I docked from its score was mainly due to the extremely slow introduction. And for someone that has a high tolerance to boring plot and dwindling writing, I was seriously considering dropping it about 50-75 pages into the book. Although I had picked this book up because it was hockey, I realized that it was too much hockey. Yet what makes up for this slow exposition (and excessive hockey addiction) is the very fact that Backman purposely used it to clearly draw a portrait of Beartown and every single character within. Fifty pages later, the plot really kicked in and the characters took me on a journey through the development of this town’s culture. In retrospect, Backman needed that strong foundation to create the characters in Beartown. And well. Eventually I grew to understand why these characters cared so much about hockey.

But what Backman did right in Beartown was how he used the hockey town skillfully, thematically and narratively. More than anything else, Beartown was a commentary on toxic masculinity, rape culture, mental health, and sacrifice depicted through the lens of the hockey community. It was an incredibly dark novel. Backman’s message may have been a little ham-fisted but it is one that is necessary. And the only reason it was such a powerful read was because of the nuanced characterization of every person in this novel.

There was not a single character in this book that I could complain of. Maya and her best friend Ana, Amat, Benji, Kevin, Kira, Peter, all of them were fleshed out. Every perspective, from that of the students and parents to the hockey club sponsors were developed in ways that made it easy to understand each character’s motivations and decisions. The strength of these characters truly drove the story; it was not just the story of the events of a hockey town, but why these characters made the choices they did. I loved these characters.

Perhaps what was most impressive was how Backman skillfully wrote an omniscient third-person point-of-view book and I DIDN’T GET CONFUSED ONCE. There have been so many books where it was almost impossible to tell who was narrating or what was going on because of the sheer number of characters. Or the prose is choppy and each character transition takes you out of the flow of the story. In Beartown, Backman would transition between three different characters within five pages yet I wouldn’t get confused once. Yet the reason it was so effective was because the foundation of this book, the scenic, quaint town and the tone taken throughout the novel, was solid throughout. The tone was the commonality shared among the characters and held the entire piece together.

As I read, there were multiple instances in which I thought I could predict the plot but turned out to be completely wrong. But if you are to read this, I urge you to pay attention to the characters because when I was thinking about them, I realized that Backman truly followed his characters. This isn’t a case of characters being manipulated to fit a plotline, but one where there was only one possible result because of the nature of the characters. I’m serious in saying that I was screaming, “no, no, no, no, no THAT CAN’T HAPPEN,” only to realize that what I expected to happen was the product of reading one too many novels with cliche endings.

I will admit that while Backman’s writing was beautiful, his style of redundancy was somewhat annoying. It made the theme too obvious, almost as if it existed separately from the story he was telling. I got the impression that he was afraid that we, as readers, would miss his message, and thus, he decided to state his themes and explain them every chapter when it wasn’t necessary. With the strength of his narration and characters, his message still would have gotten across. I also think it would have cut this book about fifty pages shorter. JUST IMAGINE HOW BEAUTIFUL THIS BOOK WAS BEFORE TRANSLATION. I wish I understood Swedish.

But while Beartown wasn’t perfect, what it did well, it did really really well. The sensitive handling of dark topics and taking readers to the deepest parts of each character’s mind combined with the seamless transitions and character growth seriously impressed me. Like y’all. Read this book. I can’t promise that you’ll love hockey afterwards (I certainly still don’t) but you might shed a tear or two. Or it’ll at least make your heart hurt a bit for these characters. Book two is coming out in a few months so I’m about to go pre-order that ish.