The thing that kills me the most about this post is that i wrote this three years ago and… never posted it? I still think it’s a pretty solid review minus any grammatical errors that I’m just not gonna fix. In the spirit of nostalgia (because I’m about to be a high school graduate yippee), I figured posting this relic of a review would be fun. Have fun with 15-year-old Kelly! 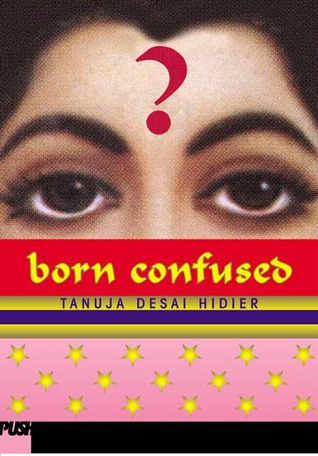 Dimple Lala doesn’t know what to think. Her parents are from India, and she’s spent her whole life resisting their traditions. Then suddenly she gets to high school and everything Indian is trendy. To make matters worse, her parents arrange for her to meet a “suitable boy.” Of course it doesn’t go well — until Dimple goes to a club and finds him spinning a magical web . Suddenly the suitable boy is suitable because of his sheer unsuitability. Complications ensue. This is a funny, thoughtful story about finding your heart, finding your culture, and finding your place in America.

I’m so glad that I found this on Goodreads. Besides the fact that it is definitely a diverse book, I haven’t read many novels that star a second generation Indian teen. I know so many Indian people that all take pride in their “brown” culture so I’m pretty surprised that I don’t see more books representing them.

Anyways, I have a lot to say about this book so I’m willing to bet that this review is going to be really, really long.

First, I want to say that while this book deals with a lot of different topics, it’s way too long. I get that the author wanted to fully cover a bunch of different topics but in some parts, I just really wanted the book to go on. The pacing was one of the only big technical issues with the book. It doesn’t really pick up until the second half, so until then, I was guilty of skimming some parts.

In terms of writing style and formatting, I want to say that while the writing was beautiful, sometimes it came off too jargon-y. There was a lot of complex vocabulary.

I also need to note that each piece of dialogue was marked with a hyphen instead of quotes. I found it distracting and it made it so that every time I read it, I imagined it as if it were a part of Dimple’s thoughts. It was hard to adjust to it.

The characters were really well done. Like super developed. I really liked Dimple’s personality and development. While she was really petty at times, I still think that a lot of her opinions were somewhat justified. Some of them definitely were not, but she’s a teenager and it makes it all the more realistic that she would make mistakes. Her narration rang true in a way that made her relatable. I absolutely loved her.

On the other hand, I detested Gwyn. She was the “perfect” American girl (as noted many times in the book) and  I felt like she and Dimple had a downright terrible friendship. They shared the type of relationship where there’s no listening and where the characters click in a dissonant, unfair way. They shared a jealous friendship in which they don’t always tell each other what’s wrong. Of course they still loved each other to death, as friends, and trusted each other. That doesn’t really mean I have to like it though. There is some stuff that kind of “justifies” her behavior towards the end but honestly, I didn’t feel like it did anything to improve my overall opinion of her. To be honest, I really didn’t like her that much because she was trying to become Indian. I have nothing against her embracing Indian culture but the blatant way that she decided to become more “Indian” as if the ethnicity and culture was a costume she could put on really, really annoyed me. It’s as if someone started to use chopsticks at every meal because it made them more Eastern Asian. Please. No.

This book talked about a lot of different important topics. Not only did it talk about how difficult it may be to find your position between a nationality and ethnicity but it also included family, LGBTQ, individuality, and racial issues. I liked that the author addressed these and included them in a way that didn’t overwhelm the novel. (Highlight to read spoilers)I think my favorite part of this was that it even portrayed a scene in which a one of the characters broke up with her girlfriend, because she felt as if her girlfriend was not confident enough about her sexuality. Basically, what happened is that these girls were dating but one was still closeted. The out female felt as if her closeted girlfriend was ashamed of being lesbian, and thus broke up with her. I loved that the author showed that discrimination doesn’t only exist between heterosexuals and homosexuals, but also within the LGBTQ community.

The romance. Gawd. Spare me. There was a lot of drama with the romance and it was seriously annoying. I didn’t get why Karsh was so interesting. I get that he’s a DJ and cute and all that but I found him pretty boring. There’s a love triangle in this book and I actually did get annoyed by it this time. Karsh suddenly became more important to Gwyn than Dimple, which breaks like rule number one of the Best Friend Code (which I just made up). That is, don’t abandon your best friends for a dude. Ugh. And Karsh kept flirting with both of them which is a major NO because it came off to me as if he was cheating on Gwyn. Ugh. Too much drama with the romance. I didn’t like anybody with Karsh.

I could talk for days about this book but the main thing to take away from this review is that there is so much diversity. There’s a lot of different things that come out of this book. The length is definitely a problem but the way that Hidier tries to represent so many different people in this book is something that I truly loved. There’s different cultures, sexualities, ways of life, expression, etc. I can’t even begin to name all of it. Worth a read if the length and romance doesn’t bother you but I’m sincerely happy that I discovered this book.

I found out that there was a sequel! And it has really low reviews on Goodreads. I don’t know if I should read it. I felt like Born Confused wrapped up nearly everything we had to know about Dimple’s world so I’m not sure if I want to.