The Museum of Intangible Things 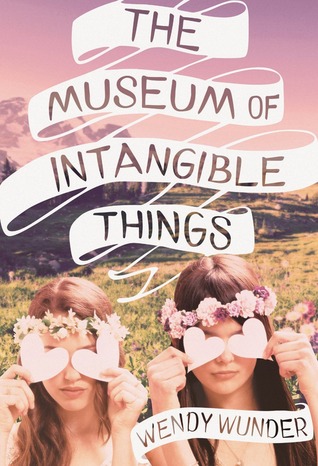 Hannah and Zoe haven’t had much in their lives, but they’ve always had each other. So when Zoe tells Hannah she needs to get out of their down-and-out New Jersey town, they pile into Hannah’s beat-up old Le Mans and head west, putting everything—their deadbeat parents, their disappointing love lives, their inevitable enrollment at community college—behind them.

As they chase storms and make new friends, Zoe tells Hannah she wants more for her. She wants her to live bigger, dream grander, aim higher. And so Zoe begins teaching Hannah all about life’s intangible things, concepts sadly missing from her existence—things like audacity, insouciance, karma, and even happiness.

An unforgettable read from the acclaimed author of The Probability of Miracles, The Museum of Intangible Things sparkles with the humor and heartbreak of true friendship and first love.

WARNING: THIS ENTIRE REVIEW IS A GINORMOUS RANT AND I APOLOGIZE IN ADVANCE FOR THE LENGTH.

Bleh. This book was bleh. I’m so happy that it’s finally over after struggling through it for a few days.

The Museum of Intangible Things centers on two girls that are best friends, Zoe and Hannah. Now as teenagers, Zoe is itching to leave their small town and explore. What follows is a long road trip where Zoe hopes to bring Hannah out of her shell and learn to be more outgoing and big. Things like insouciance and audacity.

I hated the characters in this book so much. Zoe is so annoying. I don’t know if any of you guys have watched anime or more specifically, The Melancholy of Haruhi Suzumiya, but Zoe reminds me of Haruhi from that. Both of them are obsessed with their friend’s breasts, believe in aliens, are bipolar (except in Zoe’s case, she’s actually diagnosed), and are extremely impulsive. The key difference is that Haruhi doesn’t appear nearly as annoying as Zoe and that in Haruhi’s case, these aliens actually exist. I hated Zoe. I don’t know who taught Zoe friendship or how to be a sister, but you don’t bring your little brother to high school parties and you most certainly do not make your friend drive you on a road trip and spend the money that you guys are sharing or peer pressure her into smoking. You don’t leave your brother because you want to go join a colony of aliens! On top of this, she doesn’t seem to care whatsoever about the fact that Hannah actually cares about her school grades. Zoe was a terrible friend and I don’t care if she was bipolar because she really needed a smack upside the head. Her behavior is immature and incredibly stupid.

Now let’s move on to Hannah. Hannah was spineless. Zoe walked all over her and when Hannah finally gets the guts to actually tell her friend to go back to town, Zoe decides to play the vanishing act (reason number 358 why I hate her). Hannah was manipulated so many times by Zoe that it wasn’t even funny. Zoe tells her to flash some random passerbys. She complies. Zoe tells her to sneak into an Ikea and sleep there for the night. She complies. Zoe tells her to do anything and she will do it. She has no mind of her own and she doesn’t seem  to care enough about her own future to maybe stand up to her supposed best friend. On top of this, the romance in The Museum of Intangible Things is over the top and absolutely ridiculous. She and Danny have talked a total of three or four times and somehow she has deluded herself into believing that she loves him. She is clearly incapable of recognizing the signs of a good boyfriend because even when he is cheating on his girlfriend, Rebecca, Hannah doesn’t seem to mind whatsoever. She’s more concerned with the fact that Danny seems to be dating Rebecca at the same time. Gurl, if your guy isn’t devoting all of his attention to you, but dividing between you and another girl, you need to kick him to the curb.

And later in the relationship, it’s even worse. They’ve been together less than a month and Danny is already pushing his sexual advances on her. They have a less than savory first time in his ice-cream truck where Hannah supposedly “finds God” at the same time she loses her virginity.

“We lie down together on our sides. He stares at me, moving his finger from my forehead, down my nose, over my chin, along my neck until it lands between my breasts.

‘I see that,’ he tells me, and he uses his nimble fingers to deftly, expertly savor each one before he pops it open slowly.

There, in a parked ice cream truck just outside of Buffalo, Wyoming, I say yes. I resign myself to finding God. And it’s true what they say. You can find God anywhere.

Since when was ice-cream truck sex romantic? It sounds unhygienic and utterly unromantic. I don’t know what Hannah was thinking when she decided that she wanted to have sex after dating Danny for less than a month. Even saying that they’ve been dating is a stretch because it’s still unclear if he’s broken up with Rebecca. Obviously, even if she’s supposed to be smart, she’s not smart enough to make good choices in her sex life. Most guys wouldn’t even dream of trying to have sex with a girl that they’ve only dated twice. Although they kissed in 6th grade, Danny must have a lot of balls to try to make a move on her that soon. Oh wait. He doesn’t get turned down because Hannah is overly horny after that first experience. What happened to the innocent hand-holding? The sweet dates? Oh yeah. They’re nonexistent because there’s no substantial romantic development in this book at all.

Let us talk about Danny now shall we? Danny is one of the douchiest love interests I have ever met. All he ever has on mind is sex and girls. Apparently, in his world, it’s okay to cheat on his girlfriend of four years because he was dating her for “practice” anyways. He doesn’t care about her feelings at all. And he thinks that he “knows” Hannah even though he hasn’t even talked to her since the sixth grade.

‘I know that when you eat lunch, you’re the only one in the cafeteria who actually places her paper napkin on her lap.’

‘I know that you have a freckly underneath your left eye. I know that when you smile, your eyes close into adorable half-circles and all that’s visible are a little gleam of light and your thick black eyelashes. I know that you are really nice to that kid with Tourette’s and you sit patiently and help him with his math homework even though he’s uncontrollably barking ‘cocksucker’ at the top of his lungs ever five minutes. I know that you are trying to improve your life even though the odds are stacked up against you, and that you hide in the attic of the Cunty Day School to try to learn as much as you can. I know that you would give your left arm to help Zoe if she needed it, and that’s why we’re here. I think I know enough.'”

If I were Hannah, I’d probably have some facial expression like this.

Like please explain how the heck you know that just from watching me!

Moving on to plot. The plot of the book was so so boring. It was hard to stay interested in it because the plot is pretty much Zoe doing something bold and encouraging Hannah to do it. And then they nearly get caught by law enforcement. Then they escape. Rinse and repeat. It’s repetitive, dull, and not worth struggling through. The only good part was the ending. I was satisfied with the way the book ended even if it meant that I had to struggle through the beginning.

Wunder’s writing was pretty good. It was understandable and I thought that although I didn’t enjoy this book, it fit well.

I also liked the concept of the museum of intangible things that Zoe made for her brother.