In this enthralling companion to his New York Times bestseller Every Day, David Levithan (co-author of Will Grayson, Will Grayson with John Green) tells Rhiannon’s side of the story as she seeks to discover the truth about love and how it can change you.

Every day is the same for Rhiannon. She has accepted her life, convinced herself that she deserves her distant, temperamental boyfriend, Justin, even established guidelines by which to live: Don’t be too needy. Avoid upsetting him. Never get your hopes up.

Until the morning everything changes. Justin seems to see her, to want to be with her for the first time, and they share a perfect day—a perfect day Justin doesn’t remember the next morning. Confused, depressed, and desperate for another day as great as that one, Rhiannon starts questioning everything. Then, one day, a stranger tells her that the Justin she spent that day with, the one who made her feel like a real person . . . wasn’t Justin at all.

END_OF_DOCUMENT_TOKEN_TO_BE_REPLACED

Dash and Lily’s Book of Dares 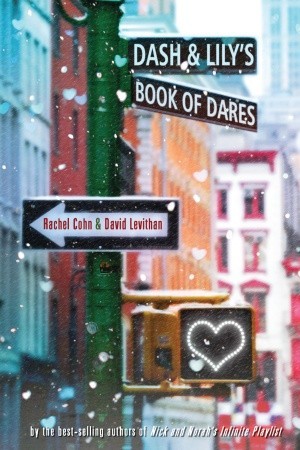 “I’ve left some clues for you.
If you want them, turn the page.
If you don’t, put the book back on the shelf, please.”

So begins the latest whirlwind romance from the bestselling authors of Nick & Norah’s Infinite Playlist. Lily has left a red notebook full of challenges on a favorite bookstore shelf, waiting for just the right guy to come along and accept its dares. But is Dash that right guy? Or are Dash and Lily only destined to trade dares, dreams, and desires in the notebook they pass back and forth at locations across New York? Could their in-person selves possibly connect as well as their notebook versions? Or will they be a cosmic mismatch of disastrous proportions?

I have yet to find a book with John Green-esque writing that I actually like. Dash and Lily’s Book of Dares, was a short, Christmas-y (sort of) romance novel that I think would have been better to read two or three months from now to maybe try to get into the Christmas spirit.

Actually, now that I think about it, it wouldn’t help me get into the spirit at all. It doesn’t really talk about Christmas in a positive light. Both Dash and Lily had kind of terrible Christmases.

Anyways, Dash and Lily’s Book of Dares was co-written by Rachel Cohn and David Levithan. In the Author’s Bio, you find out that each person wrote one point-of-view. Cohn wrote Lily’s and Levithan wrote Dash’s. This was evident in the book when Dash talked like a fifty-year-old man that majored in philosophy and Lily talked more like a normal person. I had a hard time believing that Dash was actually a teenager. His vocabulary might have been one thing, but the extremely pretentious attitude that he had was just annoying. He was a snobby, narcissistic character that didn’t seem to understand that his actions might have been annoying to other people. Lily was fab and only because she made the book a lot more enjoyable. She was fresh, quirky, and one of the better aspects of the book. Even so, I can’t say that either of them were characterized very well.

I went into the book thinking that Dash would be a cool character because his name. HIS NAME IS FAB. Then I learned what it stood for and it became significantly less fab. Dashiell? Really? It’s a good thing it was abbreviated because the name just makes him seem even more pretentious.

The idea was a different take on the classic “romance in a notebook” tale. Essentially, Dash finds a notebook (courtesy of Lily) in the Strand bookstore. He opens it and discovers a little riddle with clues that he solves to get the answers. Obviously, he solves all of them and their romance unwinds.

The book is extremely predictable. There are two main characters, and two other “contenders” that blocked the paths of the characters. It’s pretty obvious that these “contenders” weren’t real “contenders” for Dash and Lily anyways, seeing how the shoddy portrayal of them is enough for anybody to show that they weren’t for the main couple.

I enjoyed reading about the different challenges that they each had to do to return the notebook to each other but I didn’t really like it when they ran into the issue where they suddenly lost the ability to transfer the notebook back and forth. The book just seemed to drag without the adventures to hold up the plot. Normally, I would have finished a 250 page book in a day or so, but Dash and Lily’s Book of Dares just seemed to take so much longer to read. I was never really into it and I had to force myself to read the last fifty pages.

Dash and Lily’s Book of Dares wasn’t really anything special in the world of YA. Just another book floating around that follows the generic romantic novel outline.