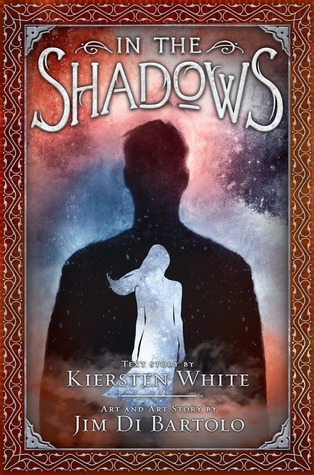 From the remarkable imagination of acclaimed artist Jim Di Bartolo and the exquisite pen of bestselling author Kiersten White comes a spellbinding story of love, mystery, and dark conspiracy, told in an alternating narrative of words and pictures.

Cora and Minnie are sisters living in a small, stifling town where strange and mysterious things occur. Their mother runs the local boarding house. Their father is gone. The woman up the hill may or may not be a witch.

Thomas and Charles are brothers who’ve been exiled to the boarding house so Thomas can tame his ways and Charles can fight an illness that is killing him with increasing speed. Their family history is one of sorrow and guilt. They think they can escape from it . . . but they can’t.

Can I just say that I loved the art? But great art doesn’t always mean that the book is just as amazing. I found that the drawings didn’t communicate very well because I was extremely confused throughout the course of the book. The pictures would often look as if they had skipped a scene and I struggled to find a connection between the two stories up until near the end of the book. It made the reading experience less enjoyable. The connections are disjointed and jostle the flow of the book. In the Shadows lacked the storytelling aspect. The writing was bland and the plot was even more so. It lacked flavor and dragged a lot. It seemed like a lot of nothing was happening. Honestly, the back story and plot isn’t explained at all until the last fifty pages. It’s all rushed. The romance in this book was also shallow. It could have been something great, but instead it had the feeling of a summer fling.

Characterization wasn’t terrible but it could have been better. It felt as if the characters had certain personality traits pasted on them but that these traits weren’t constant. Some were obviously more strongly developed than the others although there were five principle characters. For instance, Minnie, Thomas, are significantly better developed than Charles. The execution of what could have been a great idea was sloppy and boring. Opposite the main characters, the villains were about as threatening as pansies. I didn’t feel any suspense or tension about what was happening; it was all told in a way that eliminated all the emotion.

And the writing gets it’s own paragraphs because I have lots to say about it.

FIRST OF ALL. The worldbuilding sucks. It’s downright terrible. It’s like the author took a historical setting (which is 18-something? Might be earlier. It doesn’t specify the exact date of the sections at the boarding house) and then stuck some type of supernatural/fantasy idea behind it. All of the worldbuilding is thrown into the last fifty pages (some of which were pictures) and as a result, is a discombobulated, non-descriptive mess. You get a small tidbit at the beginning, some scattered here and there in the middle, and the rest of it in the end. Badly developed, very unbelievable, and unsatisfying.

SECONDLY. The writing is choppy and repetitive. The flow is awkward. I see the same word used two or three sentences in a row. The sentences are broken up. Sometimes this works. Other times, it sounds awkward. Everything about the writing just screams awkward. It’s like being in a conversation with someone you just met.

I wish I had just skipped this one. I expected so much from it but was disappointed. When it was over I was literally like, “That was it?” The sweet, funny ending didn’t make up for the rest of the book. It worked, but at the same time, there were many elements missing that would have made it better. There was little to no actual content in this book. If you enjoy graphic novels, perhaps you would like this one, but otherwise, don’t bother.

Side note: I did like the title of the book. It seems so generic but then once you read the book, it all makes sense!