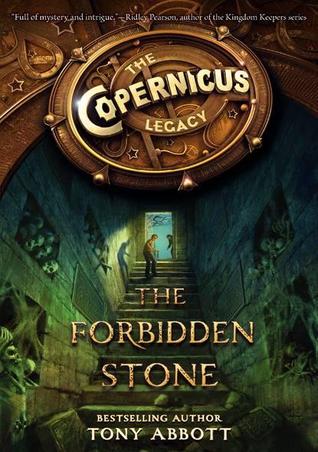 The Copernicus Legacy has everything middle-grade readers love-an international adventure, a compelling friendship story, and a mission that draws on history and astronomy. Readers who loved Percy Jackson will be eager to follow our heroes on this six-book, six-novella journey and excited to enter a sweepstakes to participate in a real-life scavenger hunt hosted by Tony Abbott that lets the reader become part of the story.

It all began when four friends-Wade, Lily, Darrel, and Becca-received a strange, coded email from Wade’s uncle Henry shortly before the old man’s sudden death. They set off for Germany to attend the funeral with Wade’s father, Roald, and discover that Uncle Henry left them yet another baffling message that they suspect is the key to figuring out how and why he died.

The message leads to a clue, and the more clues they discover, the farther they travel down a treacherous path toward an ancient, guarded secret. Soon they are in a breathless race across the globe, running for their lives as a dangerous shadow organization chases them around every corner. Their only hope of saving themselves-and the world that they know-is to find twelve magical relics from a hidden past that will unlock the Copernicus Legacy.

I hated the writing. I hated the ellipses. Oh the ellipses. Nobody should ever use that many ellipses in a book. It was awful. Turn a page. Ellipse. Read a paragraph. Another ellipse. THERE WERE TOO MANY ELLIPSES.

“The tram made another s-l-o-w stop. Three passengers got off. Probably going to sleep. How much longer…?” (page 177)

DO YOU SEE WHAT I MEAN?! I ASSURE YOU THAT I DID NOT INSERT RANDOM ELLIPSES. THIS IS HOW THE BOOK WAS PRINTED.

Not only this but there are multiple grammatical sentence structure errors throughout the book. It was choppy.

But what I really detested about the book was the characters. Every single one of them was a Mary Sue/Gary Stu. I don’t care if Becca is slightly insecure. She’s still a Mary Sue. Somehow, all of them are smart in some way but then they don’t know what a substitution code is? How old are they? In what universe does a fully grown adult allow children to coerce him into flying all of them to a foreign country? In what universe, will ANYBODY be able to find five tickets on a plane to Europe in ONE DAY? The universe practically revolves around them. Becca was the worst. She knows five languages. She knows all type of history facts. She knows science. She knows friggin’ everything. She’s quiet. She’s nice. THERE IS NOTHING WRONG WITH HER. Lily might not be smart, but she is a “fantastic researcher”. But please explain to me how she can get WIRELESS IN A FOREIGN COUNTRY SO EASILY. DID I MISS THE MEMO ABOUT HOW SHE GOT 4G IN A FOREIGN COUNTRY? IT’S REALLY EXPENSIVE THERE. DID YOU KNOW THAT? WOULD YOUR PARENTS BE WILLING TO PAY FOR WIRELESS? OH YEAH OF COURSE THEY WOULD SINCE THE ENTIRE FRIGGIN’ UNIVERSE REVOLVES AROUND THESE FOUR KIDS. DID I MISS THE FACT THAT SHE SOMEHOW MANAGED TO CONNECT TO WIFI IN A TAXI? I’M FAIRLY CERTAIN THAT TAXI’S IN EUROPE DO NOT COME WITH WIFI. AIN’T NOBODY GOT MONEY FOR THAT. PLEASE EXPLAIN THIS TO ME. HOW IS HER LAPTOP OR TABLET NOT DEAD YET? HOW? Wade is annoying. He knows science and is just as smart as Becca, but then he always feel as if she is superior. Darrell isn’t supposed to be smart, but then of course he also knows some of the lovely facts that would benefit them on their journey. It doesn’t make any logical sense. They are said to be smart but then do some of the stupidest things I have ever read. If you are trying to maintain secrecy and “stay off the grid” as you have said, DON’T POST BLOG POSTS ABOUT THE ADVENTURE. I’m pretty sure that if they KNOW WHERE YOU LIVE and WHAT YOUR PHONE AND SUCH IS, the they can PROBABLY FIGURE OUT YOU HAVE A BLOG. Secondly, WHO WIELDS A DAGGER AND TAKES IT OUT IN PUBLIC. AGAIN, SECRECY. If you take out a very expensive-looking, dangerous weapon, what normal person isn’t going to notice? Please gain some common sense.

The plot is inane. Again, since the world REVOLVES AROUND THESE CHILDREN, they can do anything without getting in trouble. They somehow have endless pockets and can come up with fantastic plans that miraculously work. Paired with the terrible writing, the book dragged to the point that I stopped just past the halfway point. I had to force myself to read it. I applaud myself for getting that far.

Lastly, before I finish this lovely rant, the scientific facts are wrong. I appreciate the research, but use more accurate sources.